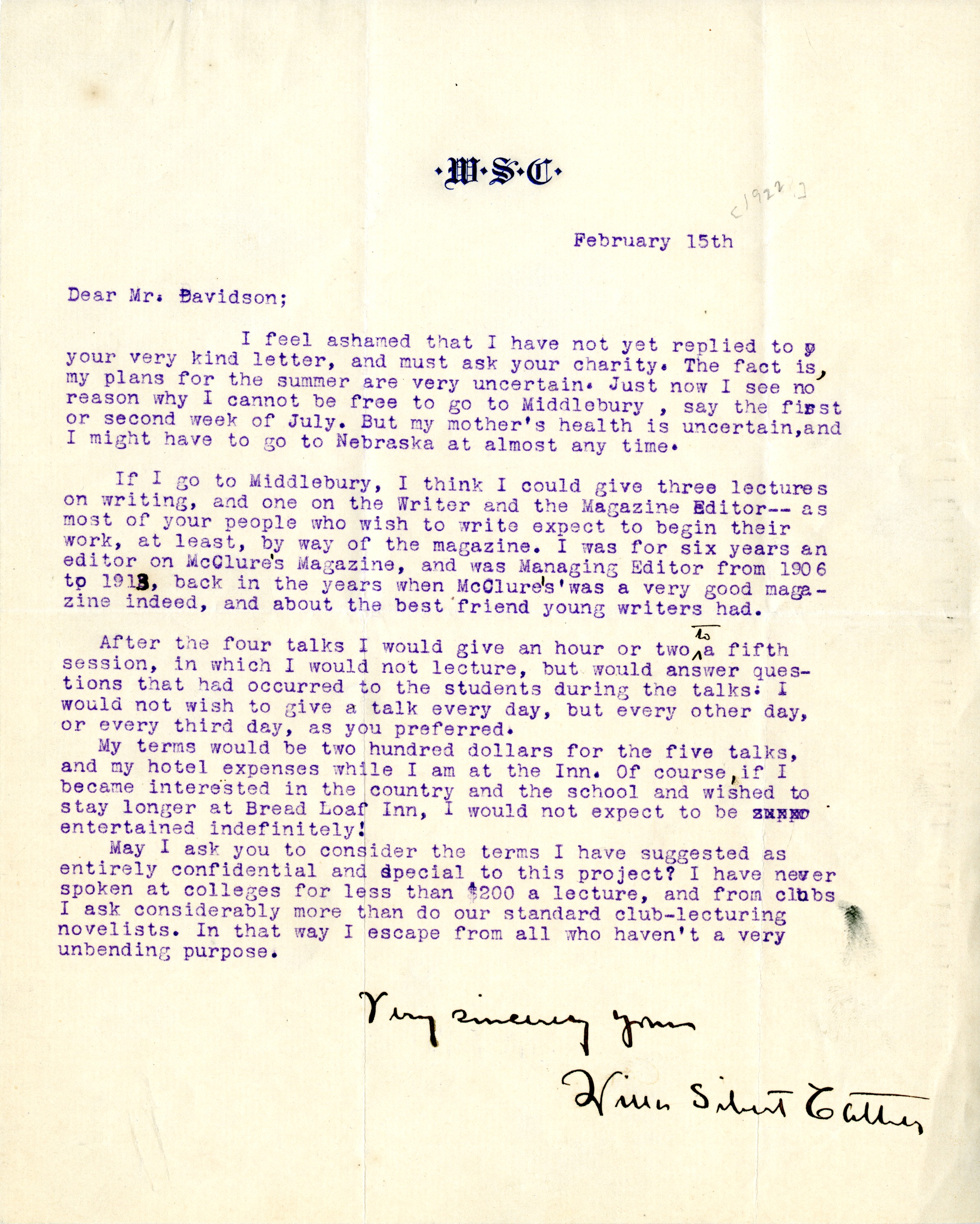 Letter written by Willa Cather to Wilfred Edward Davison, dated February 15 [1922].
This is a scanned version of the original image in Special Collections and Archives at Middlebury College, Middlebury, Vt.
Help us improve our transcriptions! If you see an error, email us at specialcollections@middlebury.edu .

A formatted, full-text transcription for this object is available here or by selecting TEXT from the download options on this page.

Language-statement
Our collections and catalog records may contain offensive or harmful language and content that may be difficult to view. To learn more, read our statement on language in archival and library catalogs.

Rights
Reproduction and copyright information for this item is available from Special Collections and Archives, Middlebury College Library, Middlebury, Vt.

I feel ashamed that I have not yet replied to

your very kind letter, and must ask your charity. The fact is, my plans for the summer are very uncertain. Just now I see no reason why I cannot be free to go to Middlebury , say the first or second week of July. But my mother’s health is uncertain, and I might have to go to Nebraska at almost any time.

If I go to Middlebury, I think I could give three lectures

on writing, and one on the Writer and the Magazine Editor– as most of your people who wish to write expect to begin their work. At least, by way of the magazine. I was for six years an editor on McClure’s Magazine, and was Managing Editor from 1906 to 1913, back in the years when McClure’s was a very good maga- zine indeed, and about the best friend young writers had.

session, in which I would not lecture, but would answer ques- tions that had occurred to the students during the talks. I would not wish to give a talk every day, but every other day, or every third day, as you preferred. My terms would be two hundred dollars for the five talks, and my hotel expenses while I am at the Inn. Of course, if I became interested in the country and the school and wished to stay longer at Bread Loaf Inn, I would not expect to be entertained indefinitely! May I ask you to consider the terms I have suggested as entirely confidential and special to this project? I have never spoken at colleges for less than $200 a lecture, and from clubs I ask considerable more than do our standard club-lecturing novelists. In that way I escape from all who haven’t a very unbending purpose. Very sincerely yours Willa Sibert Cather [signature]